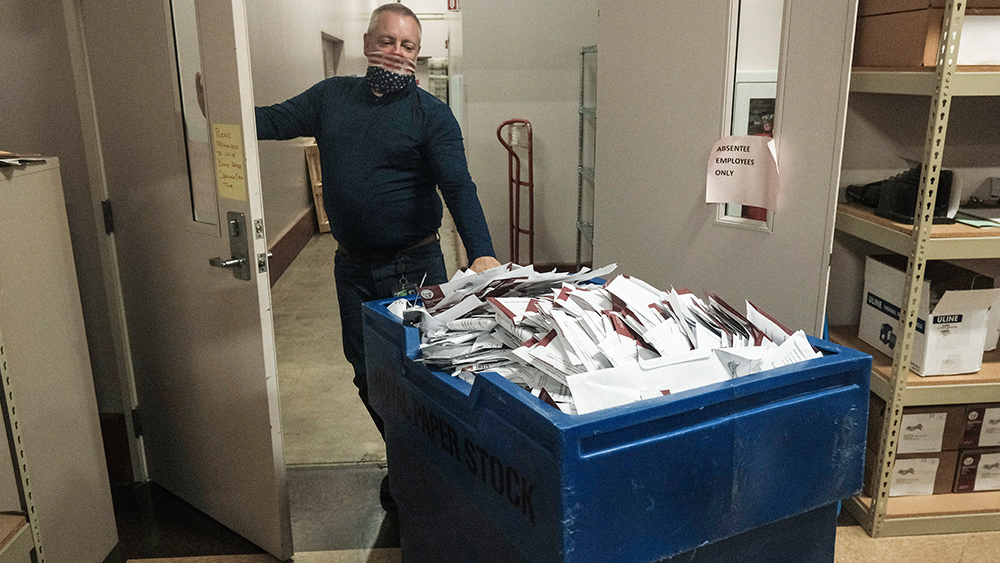 (Natural News) Videos taken from outside a vote counting center in Detroit show a massive number of ballots being dumped in the middle of the night.

The videos were acquired by Big League Politics videographer Jordan Epperson. He compiled the videos and posted them in a thread on Twitter. It shows at least five different vehicles – four cargo vans and one four-wheeler truck – stopping at a voting center in Detroit.

Mainstream media outlets immediately rushed to “fact check” the ballot dumps. An article published by USA Today claimed that dropping off votes by van is “normal” and not at all suspicious.

“On election night, election workers in Detroit don’t start collecting absentee ballots from drop boxes until after polls close at 8 p.m., since voters have until then to submit them,” wrote Sudiksha Kochi for USA Today. “The legal deadline involved here related to when ballots must be submitted, not when they must be picked up.”

“Based on our research, we rate FALSE the claim that a van was delivering ‘suspicious’ ballots on election night in Detroit,” she added.

Even the Department of Elections for the City of Detroit put out a statement claiming fake news.

“To suggest that there’s something improper about collecting those ballots after 8 p.m. is just false,” said Matt Friedman, a spokesman for the department.

The arrival of the ballot deliveries coincides with two late-night spikes in the voting total that experts have analyzed to be statistical anomalies. These spikes helped put Democratic candidates over the top against their Republican opponents.

Pre-election polling indicated that Dixon had a strong chance of beating Whitmer or, at the very least, only losing by a percentage or two. But current results, with more than 95 percent of votes counted, show that Whitmer is leading Dixon by more than 10 points, or nearly half a million votes.

The ballot drop also could have cost the Michigan Republican Party its control of both the state’s Senate and House of Representatives.

Before the election, the State Senate had 22 Republicans and 16 Democrats, and the State House had 56 Republicans, 53 Democrats and one independent. Now, they are likely to take control of both houses of the state legislature and the governor’s office – a trifecta – for the first time since 1984.

This so-called “victory” for the Democrats rested in part in taking control of House and Senate seats up for grabs in Detroit and its surrounding suburbs. Votes for some seats are still being decided, but the current count shows the Democrats controlling 20 seats in the Senate and 56 in the House against the Republican’s 18 and 54 seats, respectively. (Related: Weren’t electronic voting machines supposed to make election results appear faster, not slower?)

Learn more about cheating during the midterms at VoteFraud.news.

This video is from the channel RealNewsChannel on Brighteon.com.

If 75% of voters say they are “angry” with government, how could the Democrats have won anything?

Publius 2.0: It feels like we are watching the first wholly manufactured election in our history in which all key competitive races were programmed by Langley.