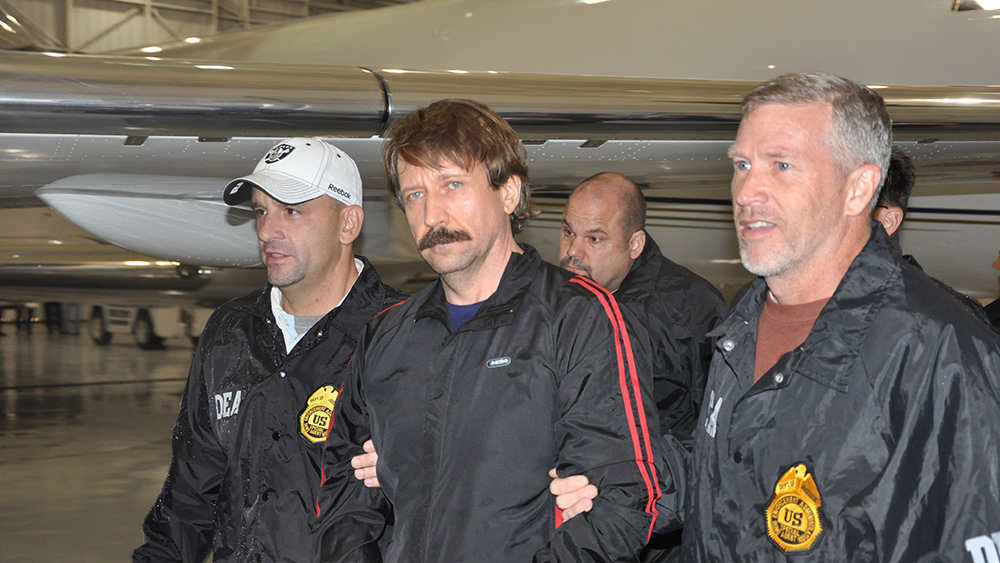 (Natural News) As you no doubt are aware, yesterday Joe Biden swapped a high-level Russian arms trafficker and former lieutenant colonel in the Russian army with a pot head LGBTQ basketball player who despises America. See The Gateway Pundit coverage here, and our own coverage here. The trade makes no sense at any level until you consider the following claim which has been presented to this author by two sources:

Biden and the Democrats are using Ukraine as a money laundering slush fund, according to two sources who spoke to me independently (and who are about to go public with this accusation, most likely today or tomorrow). Using the Russian Special Military Operation as a cover story, the U.S. has sent or pledged over $100 billion in military weapons and financial aid to Ukraine, and now they allegedly need a way to turn those weapons into cash to be laundered back into the pockets of the corrupt politicians who voted for the funding in the first place.

This is, by the way, business as usual in Washington D.C. Don’t be naive and think that kickbacks, bribery and money laundering isn’t part of war. It has always been part of war.

And as Revolver.news is now reporting — a true bombshell – Viktor Bout flew an estimated 1,000 supply missions for the United States during the Iraq War. In other words, this guy has been in the USA payroll before. He’s an employee of the state who was made a scapegoat. Now they suddenly need him again.

"Notorious arms dealer" Viktor Bout, freed today in exchange for Brittney Griner, flew an estimated 1,000 supply missions for the US in the Iraq War pic.twitter.com/fUxeU1KvCc

Viktor Bout, who was freed by Joe Biden, is an infamous international arms dealer. Convicted of arms trafficking and serving a 25-year prison sentence in the United States, he has the contacts, the know-how and the geopolitical knowledge to turn weapons into cash. I was told yesterday that Bout is being released under one condition: That he work for the Biden regime to sell US-supplied weapons to black market buyers around the world (including the Middle East), effectively laundering weapons sales into cash for Democrats and the crooked Biden crime family that’s already involved in similar schemes in Ukraine and China.

As you can see from the bombshell above, Viktor Bout has already worked for the United States in supplying weapons during the Iraq War. He’s been on the payroll before.

“Nigerian President Warns Western Weapons For Ukraine Are Ending Up In Africa,” says a recent article on USSAnews.com:

The government in Abuja claims that the weapons sent from the political West to the Kiev regime have started to appear in West Africa. According to the Nigerian authorities, illegal arms have begun to “filter” into the region. The urgent warning was recently issued by none other than President Muhammadu Buhari himself.

This indicates the black market for US weapons sent to Ukraine is already flourishing. Where there’s money to be made in offloading weapons, skilled weapons traffickers will find a way to cash in. That’s Viktor Bout’s specialty. He is widely regarded as one of the most capable people in the world in achieving weapons sales for untraceable cash.

In addition, we already know that Barack Obama and Eric Holder ran Operation Fast & Furious, which allowed the sales of high-caliber weapons to Mexican drug cartels. This was being deliberately encouraged by the Obama regime as part of his “gun control” agenda, hoping that these weapons would be used to carry out more mass shootings in America, giving Obama the leverage to demand a nationwide ban on assault rifles.

Yahoo News is even reporting today that the Pentagon “fears Viktor Bout… could restart his old arms business.” That piece of news was likely inserted into the corporate media news cycle as a cover story for the planned arms trafficking they want Bout to carry out:

“I think there is a concern that he would return to doing the same kind of work that he’s done in the past,” a senior defense officials told reporters at a Thursday briefing.

Well of course he will. That’s the point of releasing him. The pot-using, America-hating basketball player had zero value to the Biden regime. She was merely used as a cover story for the real goal: Recruiting Bout to work for the Biden regime itself, running weapons around the world for the corrupt U.S. government occupiers who also rigged the 2020 and 2022 elections and conspired with Big Tech to silence conservative voices across the country. (See the latest Twitter censorship conspiracy facts at Revolver.news.)

Victor Bout, in other words, is now working for the Democrats. If you thought the FTX money laundering operation via Ukraine was large-scale, wait until you see the tens of billions of dollars in slush fund money that’s about to be generated from illegal weapons sales routed through Ukraine.

Since the FTX collapse, the Democrats need a new large-scale slush money source to fund 2024 election rigging mules and bribes for election officials. They need “dark” campaign money. And Sam Bankman-Fried has worn out his usefulness. He is being apparently being replaced by Viktor Bout.

Does this analysis resonate with you? Or do you think Biden traded away Viktor Bout because the LGBTQ women’s basketball player was somehow politically and strategically equivalent in worth? These trades are not accidents. Biden’s handlers didn’t make a mistake. They made a deal. And they made a deal with a guy who has already been on the USA payroll trafficking weapons into the Middle East. Is anyone surprised?