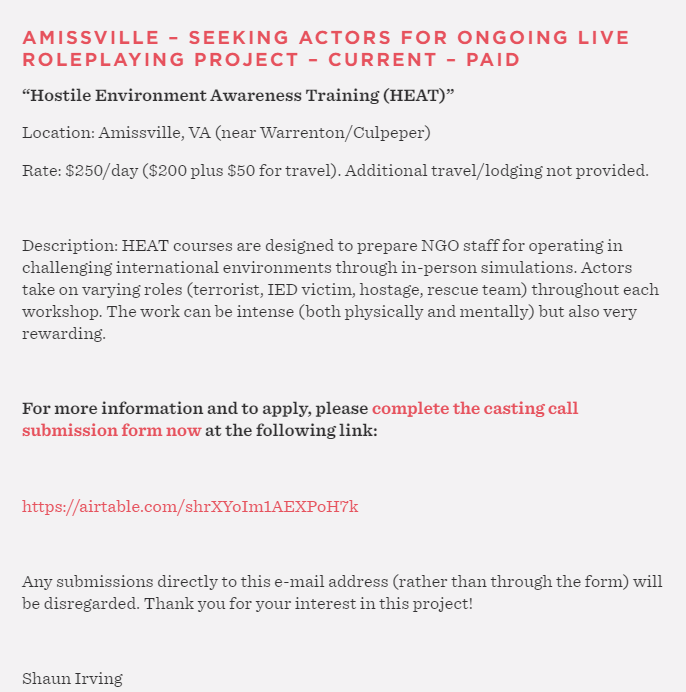 Editor’s Note: I checked late Friday Night and the listing had been removed. The screenshots taken are proof it was there at one time.

Without fail, as you look back at the false flag shootings in America or other mass shootings, there are scheduled “mass shooting training” that takes place either just prior to or on the very day of the attack.  Additionally, many reports have documented where government has sought “crisis actors” in what it calls “training” ahead of these very attacks.  With Lobby Day just days away in Virginia on Monday, January 20, Virginia is now seeking “actors” for an “ongoing live roleplaying project.”

Governor Ralph Northam has issued an illegal state of emergency claiming the militia will storm the capitol, something that has zero evidence.

That “state of emergency” claim by Northam is being challenged by Gun Owners of America as well as the Virginia Civil Defense League (VCDL) by their filing of an emergency injunction against the governor.

Clearly, those who will be attending the annual Lobby Day on Monday have done so annually for years without incident, although at this point, one wonders what lobbying does when you have representatives and a governor who are traitors to the Constitution and the people of Virginia in imposing their lawless tyranny.

So, we get this ad at Film.Virginia.org for “actors.”

Description: HEAT courses are designed to prepare NGO staff for operating in challenging international environments through in-person simulations. Actors take on varying roles (terrorist, IED victim, hostage, rescue team) throughout each workshop. The work can be intense (both physically and mentally) but also very rewarding.

So, what does HEAT stand for?  Hostile Environment Awareness Training.

Isn’t that what Governor Northam is lying about?  Hasn’t he just come up with the fact that an annual event where citizens exercise a right protected under the First Amendment to address their grievances is now a threat?  Why, yes he has.

Just in time for Lobby Day and the governor’s illegal order, we have Virginia looking for paid actors to play roles, including terrorists, hostages, rescue teams and IED victims.

Anyone seeing a pattern here from previous false flags orchestrated by our government?

And, in case you haven’t noticed, the Twitterer-in-chief has said absolutely nothing on this.