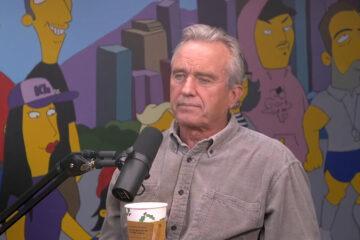 Too many people continue to be deceived by former President Donald Trump (2 Thessalonians 2:11) and his claims to be for America First. While there were things that Trump did in office that were constitutional and good, the things that he did that violated the Constitution, including funding Big Pharma for the deadly poisons being injected into people in the US and around the world was a major one for which he should have rightly been impeached and prosecuted, along with anyone and everyone who went along with it. While many of his followers continue to ignore that we are in the position we are in due to Trump’s impotence and his crimes against the People that set things up for this current illegitimate administration to be in our White House, Robert F. Kennedy exposes the fact that not only did Trump come to him and want him to help expose vaccine injuries, but after giving the green light to do so, Kennedy explained that Pfizer donated $1 million to Trump’s inaugural. However, following that is when the doors began to be shut and Trump never fulfilled his promise to Kennedy and to women to get to the bottom of what vaccines have done to the People of the united States.

I played this video on Wednesday’s The Sons of Liberty radio show to make the point that both Trump and Biden continue an unconstitutional agenda.  Take a listen to this enlightening interview, and then just be reminded that Trump was bought off…

…and not just by Pfizer.

In this explosive 12 minute Theo Von video interview with Robert Kennedy Jr., we get details of the 2016 Trump-Kennedy meeting, at which Trump gave Kennedy the go-ahead to investigate vaccine dangers.

This isn’t simply “setting the record straight” on what went down. The latest official figures on autism? 1 in 54 American children are autistic. So we are talking about the MASSIVE destruction of life, and the ongoing internal destruction of the country.

Investigating and detailing the role vaccines play in this horrific reality should be the highest priority.

Robert Kennedy, in the video interview, explains that shortly after Trump was elected in November of 2016, the new president contacted him (Kennedy) and invited him for a meeting at Trump Tower in New York.

During the two-hour sit-down with Trump, Kennedy explained that a comprehensive investigation of vaccines could be done without any heavy lifting by government. There was a well-known Vaccine Safety Datalink [2] [2b] [2c] [2d] which, when opened, would give independent researchers access to a vast trove of US medical records. From those records, a convincing case could be made about vaccine safety/dangers.

Trump gave Kennedy the green light to move ahead.

However, roadblocks then appeared.

Access to the Vaccine Safety Datalink and the medical records was severely limited. Two independent investigators were confined to one room—with only pencil and paper—to study medical records. The room was intentionally overheated to a temperature of 105. No copying-machine use was permitted.

Then Pfizer made a million-dollar contribution to Trump’s inauguration.

Then Trump made two grotesque appointments to his new administration—Scott Gottlieb as FDA commissioner, and Alex Azar as head of Health and Human Services. Both men had heavy pharmaceutical industry connections. Azar had served as chief of US Eli Lilly, and had sat on the board of the pharma trade group, the Biotechnology Innovation Organization. Scott Gottlieb was a director at Tolero Pharmaceuticals and the giant drug company, Daiichi Sankyo. He also worked for Glaxo; and now, in 2021, after his stint as FDA commissioner, Gottlieb sits on the board of Pfizer.

Did Kennedy then reach out directly to President Trump, to try to reignite the vaccine probe? The video interview doesn’t address this.

Did Trump ever explain why he allowed Kennedy’s investigation to crash and burn? Or why, at the 2016 New York meeting, he told Kennedy to announce the formation of the vaccine investigation, instead of announcing it himself, as the new President? Not to my knowledge.

One other thing. In this video interview, Kennedy says the man who keeps the vital Vaccine Safety Datalink, and all the medical information it leads to, shut down and away from independent investigators, is…

Once upon a time in the Empire, all roads led to Rome. Now they lead to the Good Doctor, and onward to Bill Gates.

Everyone knows why Trump let it crash and burn and why he installed those two goons in positions of authority and it has nothing to do with America First and everything to do with being bought off, plain and simple. Even a child could see this.

Trump is constantly reminding everyone that he is the father of the “vaccine,” and wants all the credit but doesn’t want credit for the deaths and injuries. Even his followers are getting sick of hearing him pimp for Big Pharma.